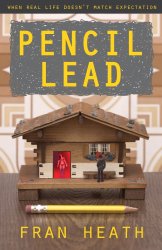 Lyle was a character I found surprisingly easy to sympathise with. He’s uncertain of what he wants, in life or anything, with no hope or prospects coming his way. This is of course mostly due to lack of effort to make anything of himself, but then, what do you work toward if you don’t know what you want? He’s a character so uncertain of himself that he comments on how he is a different person for certain people, because that’s who they think he is. He makes a show of his life and makes a show of being… himself.

A good deal of the book is getting to know Lyle before he meets Holly, and from there focusses on their destructive relationship which doesn’t really get any oomph until they involve escorts. While anyone else might look at that as being the beginning of the end and unhealthy while it lasts, neither of these two are able to see beyond their own confusion and certainly in Lyle’s case, selfishness.

I wasn’t very fond of the ending. It went quite quickly and suddenly from a couple hell-bent on ruining their lives as fast as they can, to a rather heavy moral lesson on the dark side of ‘escorts’. I wouldn’t describe it as a happy ending in particular, though I suppose that would depend on how you see happiness coming out of a relationship like that. I’m not too sure the choice Lyle and Holly made in the end was to the benefit of either of them.